​As many of you have noticed, our Hot Club family continues to grow as you see the core of the ensemble playing with different talented musicians. Indeed, as we evolve, we move more toward what might be called the Hot Club of Saratoga Collective. You will continue to see the familiar faces of our core members and the many talented players you often see with us. In addition to that, we are now inviting guest artists to join Hot Club of Saratoga for a residency for a couple of weeks or months at a time. We are excited to welcome some outstanding players from the greater gypsy jazz community that, because of our distance, we would otherwise rarely get to play with! And you would otherwise likely not have the opportunity to hear.

As part of one of our goal to enhance and build the local Gypsy Jazz community, we are excited to partner with Caffe Lena in The Hot Club Series, which will feature the current artist-in-residences in a concert and open gypsy jazz jam, whenever we can match schedules. (see below for more details)

At this time we are are offering residencies for lead guitarists.
​If you are interested in a residency with Hot Club of Saratoga, please contact us here: hotclubofsaratoga@gmail.com.
Chad Tallman on solo guitar brings his study of Django’s style and unique phrasing to every performance. He earned a music degree at Ithaca College with a focus on classical guitar. In addition to teaching guitar, Chad has played in several rock and funk bands over the years. He had stopped playing guitar altogether at one point for 2 years when one day he heard Django with fresh ears. He pulled the guitar back out with renewed enthusiasm and hasn’t looked back since. When not playing guitar you can usually find him creating a different sort of sweet lick at The Bread Basket Bakery where he is pastry chef in his family business. 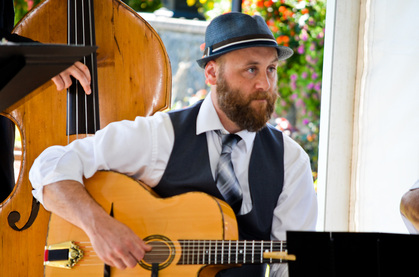 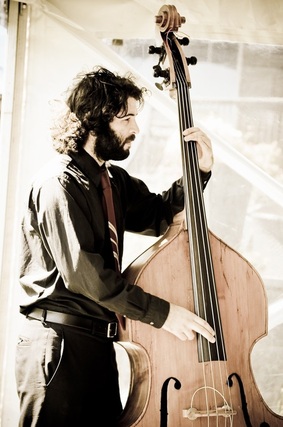 
Holding it all together and often leading off in new directions is
Dylan Perrillo on string bass. Dylan grew up in the sunshiny village of Voorheesville,
New York where was he fortunate enough to have participated in their wonderful music program beginning in primary school. Originally having played guitar at the age of
seven, he found that his skills were rendered useless when his older brother,
Tyler, began playing guitar as well. Thus, it became clear to the young lad that
switching over to the electric bass was necessary. When Dylan entered his
studies at Schenectady County Community College he began to learn to play the
upright bass and began playing with musicians from around the capital district.
Since then, he has had the pleasure of performing with some really great people
from all over the country. Dylan greatly enjoys being a part of the Hot Club of
Saratoga for the music and fellowship it employs.