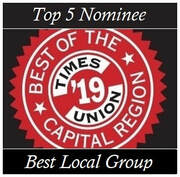 ​"...the region’s preeminent gypsy swing ensemble, the Hot Club of Saratoga."
~ Albany Times Union ~
​
This pandemic has had a drastic effect on live entertainment and
​any establishment that has supported live, local music.
We stand together with our fellow musicians and all those
venues that do their best to bring all of us who love music together.
It is our hope that once this is behind us, all come through and continue to
bring us all together in the joy and love of music.

Please do all you can to support those establishments
that have supported live local music during these tough times and going forward!
​
​

Gypsy Swing in the spirit of 1930's Paris

Hot Club of Saratoga, upstate New York's premier gypsy swing ensemble, plays a repertoire that reflects the spirit and style originated by Django Reinhardt and The Quintet of the Hot Club of France most prominent in the 1930’s and kept alive through a long line of gypsy jazz artists. The driving rhythms under dynamic soloing give the music a life and vibrancy sure to bring a smile and often an irresistible desire to move.

From the folks at Caffe Lena:
"I would have to count Hot Club of Saratoga as being probably about the best thing that's happened
to the local music scene in the last 5 years in Saratoga."
-- Sarah Craig, Caffe Lena, January 2018 --

"I did not know it was going to be so cold outside when I booked this weekend of super hot music. Our luck!  We kick it off on Friday with the blazing Gypsy Jazz of Hot Club of Saratoga. These guys took Saratoga by storm a few years ago, suddenly showing up everywhere from sidewalk cafes to the fanciest of society balls. Everyone loves the way they reprise the repertoire of Django and Stephane's Quintette du Hot Club de France."
-- Caffe Lena, 2016--

From Saratoga Performing Arts Center:
"You guys were AMAZING!!  It was one of the best Afterglow bands we have ever had for SPAC’s Ballet Gala.
Really outstanding job. Hope to see you all again soon!!"
​-- Dennis Moench, Director of Youth Education and "Afterglow" Coordinator, 2016 --
Like us on Facebook